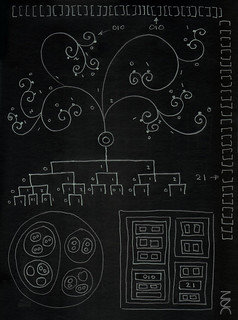 Pick an animal. Any animal. Somewhere in the world is a very special, carefully stored, individual of that species. Meticulously described, it is as well preserved as we can possibly make it. We’re trying to keep this one individual, above all others of it’s species, perfect.

It is what’s called the “Type Specimen”, and it is the chosen representative of its entire species. And we need one of these, for every single living thing, because if the world is going to be so very untidy, we at least need to be able to keep straight what it is we’re talking about.

Taxonomy is the work of grouping living things into sensible categories. This is a thankless task, because nature doesn’t have any sensible categories. Now, obviously, there is a difference between, say, a lion and an iguana, So you should be able to draw a line between them. It starts to get tricky, however, when you have to decide exactly where to put that line. Nature, as I’ve mentioned before, has no particular need to operate in nice tidy units, so you end up with awkward animals like the platypus which is definitely a mammal, except it lays eggs like a reptile or a bird does – which means it’s an odd sort of mammal that acts a bit like a bird sometimes. Messy.

So we do the best we can, and the International Commission for Zoological Nomenclature tries to keep track of it all. We’ve talked before about the naming scheme they use to keep the names straight, but the ICZN are very concerned with the future too. Because they’re trying to keep everything not only so it makes sense now, but that it makes sense 100 years from now. Or 200 years. Or more!

And the problem with these fuzzy boundaries between the different living things is that they move over time – some clever person just figures it all out in a new way, or we discover whole new ways to find out how things are related to each other. So we need to make sure that 200 years from now, when someone looks back at a description of, say, an Ornithorhynchus anatinus, they know exactly what we were talking about.

And this is where the Type Specimen comes in handy. This is the one individual that we can hold up and say “Look, humans of the future, we don’t know what you call this thing in your future-time, but when we say Ornithorhynchus anatinus, this is the thing we mean”. And yes, there is a type specimen for the lowly Homo Sapien too.

So, spare a thought for those people trying to keep it all straight for the benefit of generations of zoologists yet to come. And sometimes doing that is more difficult then you would think…