What's long and hard and full of...

So, I thought I’d give Science Brian a break from doing the science post for our latest episode, and I’m going to take on this particular one. Handily, I know a lot about submarines. Really I do.

Let’s start at the beginning.

The submarine is named after Sir John Submarine, who at one time was proprietor of the largest chain of funeral directors in the British Empire. His company, ‘Submarine’s Emporium of Loved One Despatch’, buried some of the Empire’s most well-known colonial expansionists. 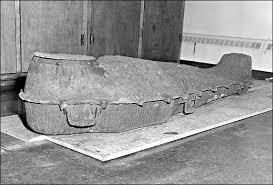 On one occasion he was visited by a family who wanted to bury their grandfather at sea. This had never been attempted before, and Sir John was rightly worried about the tendency of wood, the primary material used in coffins at the time, to float.

Sir John spent several days putting his mind to the problem, and insisted on being locked in a coffin to help with his concentration. After this he was rather reluctant to ever spend time in one again, thus he gave birth to the phrase ‘coffin dodger’. On the third day of his voluntary incarceration he emerged with a shout:

“By jingo! We’ll make the bally thing out of iron!”

A hop, skip and jump later he realised that there could be more commercial applications for his iron coffins as underwater transports. He immediately closed his funeral business (which he soon regretted as he lost a steady stream of income, and he still had some bodies that weren’t yet buried, which made the place smell), and began designing his first ‘Moving Iron Coffin’, as he dubbed it. Marketing wasn’t his strong suit.

Modern submarines aren’t actually that different from Sir John’s early designs. He added the fin-like bits that stick out for steering, and pigs bladders to blow full of air to make the contraption rise. He even foresaw the discovery of nuclear fusion by including a space in his designs for:

“…some sort of power device or something, I don’t know. Good lord this place stinks…”

Modern submarines also have sticky up bits on top, which are called ‘sails’ to avoid confusing the sailors they stuff inside them. They’ve played an important role in all major conflicts of the last two centuries, as they are ideal for people to sneak around in and pop-up with a yell of, “Surprise! Eat my torpedo, Fritz!”

For more on submarines, do check your local library. Although you’re more likely to find one in the sea.

Posted in Science
Tagged as Not science

2 thoughts on What's long and hard and full of...